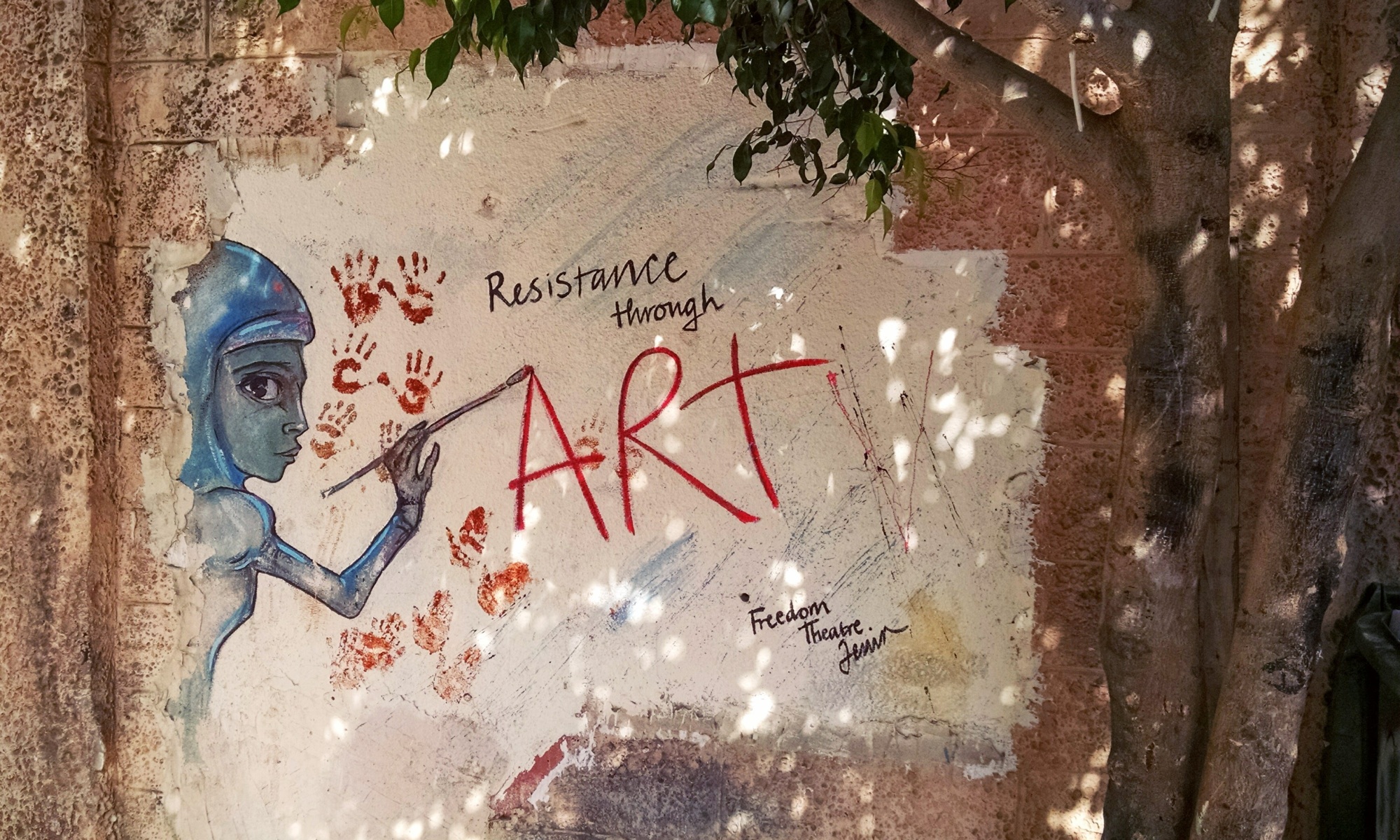 THIS PIECE WAS ORIGINALLY PUBLISHED ON STATE OF FORMATION, AN ONLINE PUBLICATION FOR EMERGING RELIGIOUS AND ETHICAL LEADERS WHICH WAS FOUNDED AS AN OFFSHOOT OF THE JOURNAL OF INTERRELIGIOUS STUDIES, HOUSED AT CIRCLE, A SHARED CENTER AT HEBREW COLLEGE AND ANDOVER NEWTON THEOLOGICAL SCHOOL.

This summer, Abigail received a scholarship to join a two-week-long Unitarian Universalists for Justice in the Middle East (UUJME) human rights delegation to Israel and Palestine. UUJME’s mission is “to promote peace and justice in Israel-Palestine, including a settlement of the conflict affirming the equality, dignity, freedom and security of all peoples involved.”

Since returning from Israel and Palestine this summer, I’ve been especially sensitive to how skewed our mainstream US media reports are—the continuous narrative of all Palestinians as violent, the underreporting of Israeli settler attacks, the refusal to explore the complexity of the conflict.

And one of the things that hurts me most is how the inspiring nonviolent action and art—what so many Palestinians we met called “Beautiful Resistance”—happening in Palestine is completely ignored. Meeting with the Palestinians who are innovating creative means of nonviolent action was one of the most affecting parts of my trip. So here. Let me share it with you. See the beauty and the resilience I too saw…

Like the art on the Bethlehem side of the looming concrete separation wall, dividing Israel from the West Bank. How you go through a checkpoint—then burst into a colorful reality of resistance through art, graffiti splashed across the wall on the Palestinian side. Portraits, humor, sadness, beauty, anger, frustration—all playing out in vivid color on a gray concrete canvas. How it is moving and beautiful—perhaps more beautiful that any of the masterpieces in a national art museum. How it is real, the voices of a people playing out in spray paint and swaths of color. How it gives you hope, a message that the spirit of these people is not dead.

Or the Diyar Consortium, also in Bethlehem, whose vision is “That We Might Have Life & Have It Abundantly,” with the aim of “influencing people’s transition from a stance of reactivity to one of pro-activity, from being victims to becoming visionaries, from waiting to creating, and from surviving to thriving.” How tears well up in your eyes when they show you this video, which shows the people of Palestine dancing, acting, playing sports, singing, cooking—celebrating their culture:

Or going to the Aida Refugee Camp, established in 1950 and with displaced refugees still surviving there. How at the Al Rowwad Cultural Center, within the walls of camp, you meet young Palestinians in the center’s Images for Life program—teaching them photography and film skills, so that they may share their stories with the world. Whole bulletin boards filled with photographs—you are caught by how they can capture small moments of beauty in such a maze of concrete and dust.

Or Bil’in, the small village crushed right up against the separation wall, made famous by the documentary Five Broken Cameras, which showed the villagers’ nonviolent resistance against the building of the wall. How you meet with Iyad, the brother of the filmmaker of Five Broken Cameras. His somber yet strong demeanor is powerful, as he tells you about the village’s commitment to nonviolent action. You can see the pain as he talks about his friend who was killed by a tear gas canister to the chest.

And more pain when he calls in his son, fifteen years old, who has been injured in one of the nonviolent protests and walks with a limp still—after a year of treatment.

Iyar tells you about how Israeli soldiers expect the villagers now, how the soldiers won’t let them even reach the separation wall where they used to protest—how the military arrives in the village on Friday mornings to keep the protestors from going down the road at any point that day.

And yet, every Friday, for the past ten years, there is a demonstration—with a different theme, a different type of protest. And you feel that that is the hope—in the action, not necessarily the product. In people putting their bodies on the line—in the tear gas, in the rubber-coated steel bullets—for justice. Again and again. Hand in hand. Together.

Or, later, in the West Bank city of Nablus, when you meet with young university students at An-Najah National University. They are on Facebook; so are you. You become friends. As you tour the school, you find yourself thinking—there is hope in going to school under occupation, of learning even when you’re skeptical of peace or an end to the violence.

You visit the student-led broadcast TV network and radio channel studios and feel hope. Here is a young generation, putting their voices out there, learning the skills to spread the word of their resistance. Strong enough to keep on, to face the news and tell the truth. To believe that what they are doing is meaningful. Still.

And then in Jenin Refugee Camp, at the Jenin Freedom Theatre. “Generating Cultural Resistance,” they tell you, as you watch performances and tour the black box theater. As they tell you that theater is seen as such a powerful threat that their founder was assassinated, the theater has been set on fire, and their staff has been raided. And you are hit once again by how powerful art can be—that theater (as one of the boys in the program says) is revolutionary, more powerful even than violence as a tool against the oppressor. That it can empower voices and effect change. Again, again, again, that theme—the power of the story. The transformation in the telling.

Creativity. Resilience. Resistance. Somehow, these human parts of us survive. Even in tear gas, gunfire, death. You see it in the eyes of the Palestinians you meet with. The storytellers. The painters. The dancers. The cooks, proud to present the perfectly formed bowl of hummus or the art of upturned maqluba. The musicians, plucking strings. The singers, filling the streets with song. When you leave, at the end of the trip, taking off in a plane from Tel Aviv, you grieve for this—for this beautiful resistance that most of the world will never know. For the stories that will go unknown. But still, somewhere, they must be told. Still.