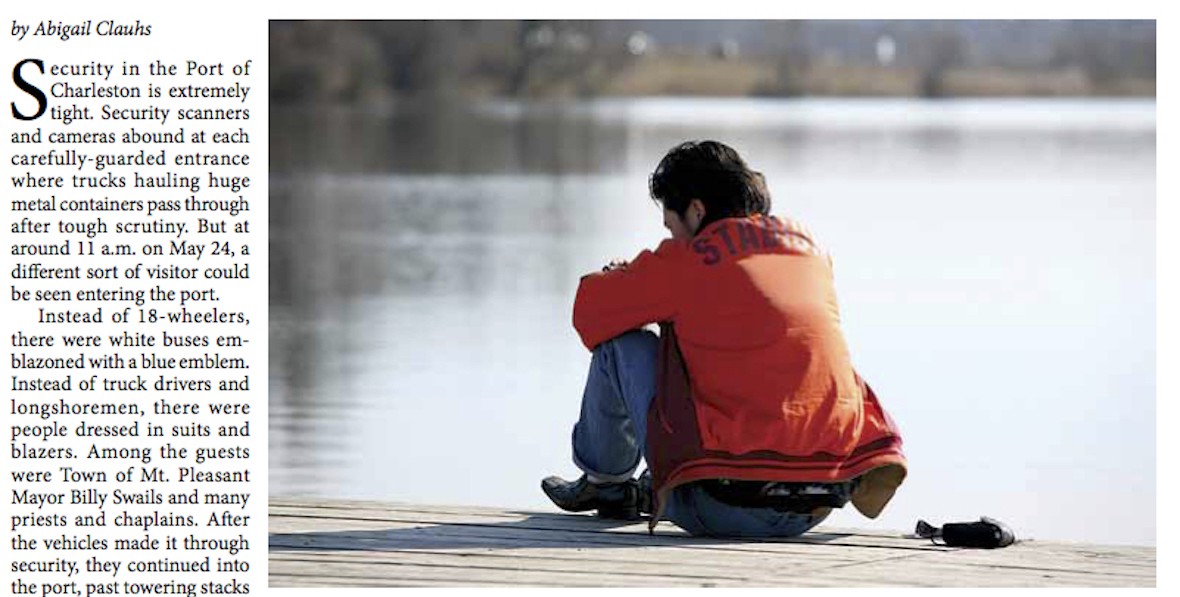 Originally published in the Fall 2011 issue of Jubilate Deo, a publication of the Episcopal Diocese of South Carolina.

An article I wrote during my internship with the Charleston Port & Seafarers’ Society, an ecumenical nonprofit that provides spiritual care as well as physical services of phones, internet, groceries, and more for the international seafarers that enter the Port of Charleston.

Security in the Port of Charleston is extremely tight. Security scanners and cameras abound at each carefully-guarded entrance where trucks hauling huge metal containers pass through after tough scrutiny. But at around 11 a.m. on May 24, a different sort of visitor could be seen entering the port.

Instead of 18-wheelers, there were white buses emblazoned with a blue emblem. Instead of truck drivers and longshoremen, there were people dressed in suits and blazers. Among the guests were Town of Mt. Pleasant Mayor Billy Swails and many priests and chaplains. After the vehicles made it through security, they continued into the port, past towering stacks of cargo containers.

This was not a typical day at the port.

These unusual guests were there to attend the dedication ceremony for the Charleston Port and Seafarers’ Society’s new trailer.

The Charleston Port and Seafarers’ Society is a nonprofit ecumenical organization dedicated to serving the seafarers who come into the Port of Charleston every day on container ships. According to the Rev. Len Williams, Chaplain of the Society, they served more than 780 ships with 25 crew members per ship in the Wando terminal in 2010, putting in more than 6,700 hours.

The Seafarers’ Society provides important services for Charleston’s seafarers, who come from all over the world. In its dockside center, it has computers and phones that mariners— many of whom are away from home for eight months at a time—can use to connect with their families. Using the same buses that were shuttling guests to the dedication ceremony, the Seafarers’ Society volunteers provide transportation to shopping at Wando Crossing, Towne Centre and Belle Hall Shopping Center; since the seafarers average only eight hours ashore, many would not be able to go anywhere without this service.

The Seafarers’ Society is also committed to serving spiritual needs. In its dockside center, it has translations of the Bible in 26 different languages. On Sundays, it provides transportation to local churches. Clergy members perform Mass onboard the ships. Although it is a Christian organization, its mission is to serve all seafarers “without regard for nationality, race, ethnicity, politics or religion.”

The work done by the Charleston Port and Seafarers’ Society is surely something to celebrate. The reason for celebration on this specific Tuesday morning was the new center made possible by the generosity of the State Ports Authority, which has been working with the Seafarers’ Society to strengthen their dockside presence.

The new center has more than doubled the capacity to serve, allowing for more computers and more workstations, as well as office space for Seafarers’ Society workers.

Board treasurer Ian MacDonald announced that the center is dedicated to Harriott Pinckney, an influential Charlestonian who first established the roots of the Seafarers’ Society back in 1823 when she bequeathed property in her will for the express purpose of building a seamen’s church there. The Seafarers’ Society is believed to be the oldest cross-cultural ministry in the United States.

Mayor Swails stressed how important the ports are to the town and the state, and thanked the Seafarers’ Society for their efforts. After hearing about the work and ministry of the Society, the guests were taken to the center, where it was blessed by Bishop Alex Dickson.

Even during the blessing, which took place outside the trailer, there were mariners inside using the computers and phones. As guests filed in to look around, they were introduced to men who hailed from Eastern Europe and Southeast Asia. The seafarers were quick to affirm how thankful they were for the facilities. One man looked at pictures of his daughter on Facebook while another answered emails from his family.

On one wall of the center, there was a large world map. Father Len Williams explained that seafarers were encouraged to affix stickers to the location of their hometowns. Just one glance at the map told the global story of the Seafarers’ Society: it was covered with countless stickers, across all the continents.

It was reminiscent of earlier in the ceremony, when volunteers had taken turns reading a psalm in multiple languages. Hearing the words in Filipino, German, Spanish and other languages was moving, and, as Father Williams said when he addressed the guests, “There is no better ambassador for our country…than the Seafarers’ Society. We are truly ministering to the entire world.”

And they are right in our very own port.